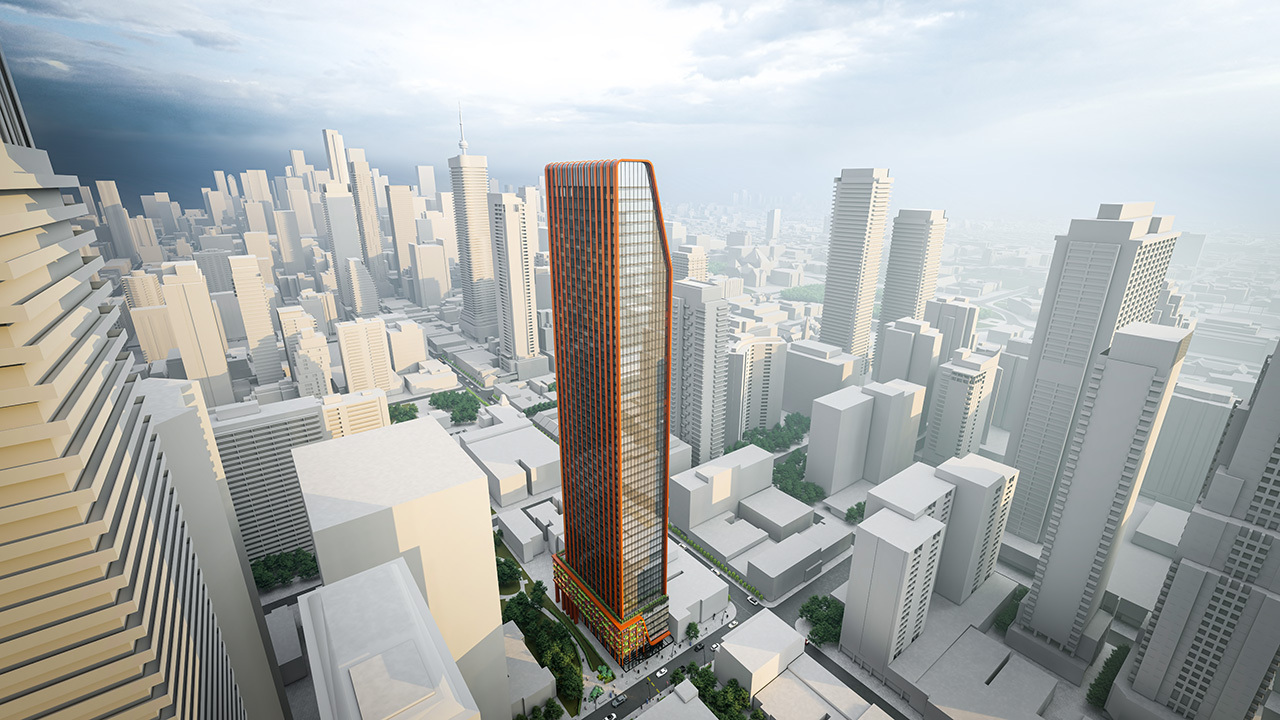 Republic Developments has asked the City of Toronto to change the zoning of the properties located at 15 Charles Street East and 16 Isabella Street, to allow for an increase in height and density at the site which is located at east of Yonge Street in the Church-Yonge Corridor in downtown Toronto and is approximately 0.15 hectares in area.

Designed by IBI Group, the proposed development comprises a 54-story residential condominium, including a six-story podium, with a total of 549 residential condominium units and 146m² of retail space at ground level, for a total gross area (SAB) of 35,625 m² and a floor area index (FSI) of 23.81. The proposed development would be entirely located on the plot of 15, rue Charles Est of the site in question, while 16, rue Isabella is proposed to be redeveloped into a park of 150 m².

15 Charles Street East by IBI Group for Republic Developments, image of the submission to the City

The surrounding area includes a series of residential, public, community and commercial skyscrapers. To the east of the site is George Hislop Park, which is owned by the municipality and extends from Charles Street East to Isabella Street. This park would be enlarged by adding space for the property at 16, rue Isabella. To the south of most of the site are other properties on Isabella Street that contain two to three storey commercial buildings. To the west of the site is the municipal “Biscuit Lane” and directly to the west are two to four storey commercial buildings facing Yonge Street. On the other side of Charles, to the north of the site, is a six-story municipal parking garage with commercial uses at ground level. The Yonge subway line passes under the parking lot and George Hislop Park.

Location of the site, image of the submission to the City

The proposed development is a slender point tower that begins to recede on the 48th floor, continuing to the mechanical penthouse in response to a 75-degree angular plan requirement for high-rise buildings near Yonge Street. With subtle curves at the corners, the tower silhouette is reminiscent of lipstick.

Elevations of 15, rue Charles Est, image of the submission to the City

Podium at 15, rue Charles Est, image taken from the bid to the City

The site is located near a variety of upper-level transportation and cycling facilities and is approximately 180 meters south of the Bloor-Yonge intersection and subway station.

More info on the development will come soon, but in the meantime you can read more about our database file for the project, linked below. If you wish, you can join the conversation in the discussion thread associated with the project forum or leave a comment in the space provided on this page.

Today's rental was chosen for the snowy scene