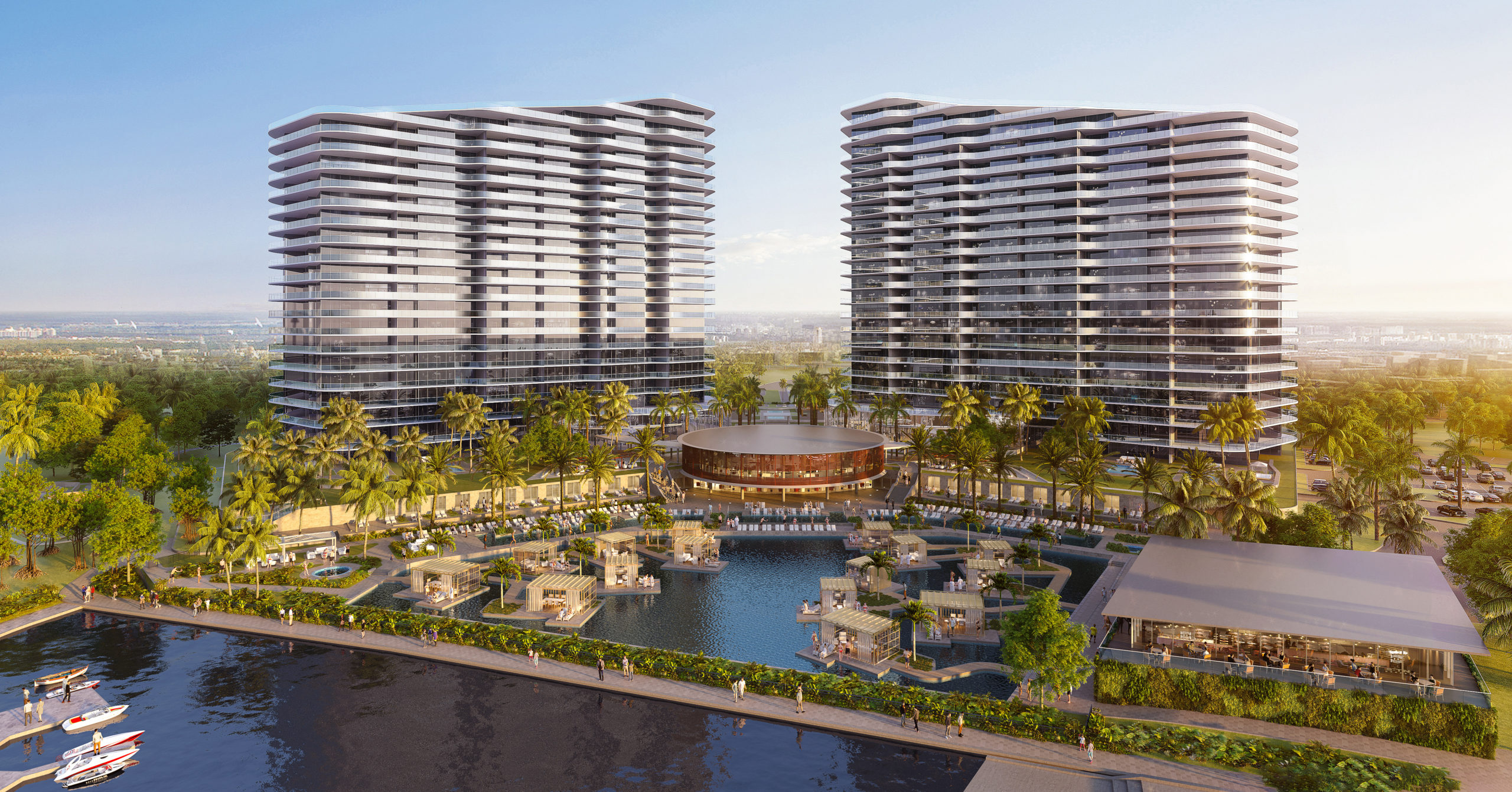 Developers and real estate agents echo the same sentiment: there is little or no buildable land left in Naples for new condominiums. The building boom that began in the 1970s with The Lutgert Companies skyscrapers at Park Shore and grew over the following decades, spreading north and east from downtown, seems to have reached its peak of saturation. For developers, it’s time to get creative. Existing buildings have been demolished near downtown to create boutique properties with large interior and exterior floor plans that live like single-family homes and ultra-luxury amenities like private rooftop terraces, lap pools, resorts and golf simulators. Development has also moved beyond Naples: some of the region’s most anticipated towers are planned for Bonita Springs and Estero with design, benefits and price points to rival Naples.

“Over the past few decades, development has moved north. The county is built up even east of I-75. Now things are moving back to downtown,” says developer Jerry Starkey, noting how new buildings have sprung up in previously neglected areas, like the Naples Design District, or taken over old construction sites near the coveted Fifth Avenue South. He and developer Fred Pezeshkan won a transformative urban development competition to secure an unoccupied lot near downtown, at the intersection of US 41 and Davis Boulevard, to build Aura in Metropolitan Naples.

Starting at $1.9 million, the two-, three-, and four-bedroom residences, spread across three 15-story towers, lure buyers with their location and amenities. “One of Metropolitan’s most spectacular features is the rooftop infinity pool. You’re 160 feet in the air, overlooking the Bay of Naples and the Gulf,” says Starkey, adding that shuttles will run between Metropolitan, downtown and the beach. “We see this as an extension of Fifth Avenue South.”

Other avant-garde developments are also coming to the city center. Stella Naples, slated for completion in 2023, plans 10 condos on Ninth Street South. Units designed by MHK Architecture & Planning, starting at around $2.5 million, feature customizable floor plans with design concierge services from LVD Spaces to help potential residents choose high-end finishes like Ruffino cabinets, Cambria countertops and herringbone marble bathroom tiles. Like Metropolitan, the rooftop is a major draw for the condos, which have private Brazilian-ipe verandas with chimneys and retractable privacy screens.

Around the corner, an office center has been razed to create The Mark on 8th, a 24-residence boutique condo. The interiors of Charles Design Studio in Naples feature open floor plans, fitted with Legno Bastone European oak flooring and slider walls that create a seamless flow between living areas and outdoor terraces. In the central courtyard, residents can take a dip in the pool or hang a lounge chair on the sun shelf, mingle around the grill and fire pit or brush up on their swing at the golf simulator.

Nearby in Naples’ Design District, the Ronto Group has transformed the former site of the Naples Daily News into Eleven Eleven Central with a host of desirable amenities, like a 3,200-square-foot pool with beach access and floor units for restaurants and shops, including Narrative Coffee Roasters, which recently claimed the space.

Parkview at Cambier in Old Naples is the most exclusive of the new downtown developments. Three of the four units sold pre-construction for $6.5 million to nearly $8 million, and the last 3,900-square-foot residence was on the market for $9.5 million in March. To command this award, developer Frank Meak and designer Suzanne Costa pulled out all the stops, including $110,000 appliance packages, custom millwork by Woodworkers Naples, and smart home technology. Private elevators take guests between their three-car garage and huge rooftops. “Everyone has 1,200 square feet of private rooftop space with a full kitchen, hot tub, living room, and fire pit,” Meak says. “Standing on the roof, you will have the Cambier park in front of you.”

This price is about to be usurped by One Naples. Last year, Stock Development won approval to demolish a shopping center to build this 128-unit, 6-acre complex at Vanderbilt Beach Road and Gulf Shore Drive. Starting at $5.5 million, the smaller three-bedroom Tower Residences have over 4,700 square feet of space, while the 10,000-square-foot Grand Penthouses have five bedrooms, six-and-a-half bathrooms and four terraces – with $30 million asking prices. In addition to living space, 50,000 square feet of indoor and outdoor amenities, including a movie theater, golf simulator, kids’ club, fitness center and spa, and curvilinear pool elevated glass-rimmed deck (not to mention the on-site marina).

With only so much land to claim in Naples, buyers and developers are also picking up properties in Lee County. Omega Bonita Bay, the latest tower in the Bonita Springs luxury development, debuts this fall. Of the 67 residences, less than 10 remain. Starting at $4.5 million, condos live like stand-alone homes, but with more perks. In addition to the tower theater, massage and steam rooms, and resort-style swimming pool, residents also have access to the five golf courses, marina, restaurants, state-of-the-art Technogym, and beach club. Bonita Bay.

The Ritz-Carlton Residences, Estero Bay, add to Lee’s condo cachet. The London Bay Development Group has purchased 500 acres of waterfront property along a mangrove-filled aquatic reserve to create a 224-condo village that connects residents to nature. “If it weren’t for exceptional land, we wouldn’t have convinced The Ritz-Carlton to partner with us,” said London Bay President and CEO Mark Wilson. “It’s a new level of luxury for the area due to the location, the size of the project and the natural beauty of the land.” You’ll pay at least $2 million for a condo in one of two 22-story towers, which feature cascading glass facades that reflect the surrounding water and sky.

Just as Ritz-Carlton resorts are known for their amenities, the community will not disappoint. Park your yacht at the 72-berth marina or get out on the water with paddleboarding, kayaking, and sunset cruises on-site. The new championship 18-hole Saltleaf Golf Preserve, bocce courts, and wellness center (with fitness classes, yoga and Pilates studio, and sauna) also promote an active lifestyle. Kids and teens can relax in the adventure room and tech lounge while mom and dad retreat to the beauty salon, five-star restaurant or wine and whiskey bar.

Acreage near the beach is nearly impossible to find, but that’s what Grandview promises at Bay Beach, at the southern tip of Fort Myers Beach. Construction is underway on the 11-storey London Bay Tower, overlooking Estero Bay and the Gulf. The 58 residences are outfitted with the luxuries discerning guests expect, including private elevator entrances, Kohler and Bosch fixtures and appliances, natural stone countertops, and expansive main rooms with sitting areas. Social areas are perched on a higher floor to make the most of those water views.

Whether or not downtown Fort Myers can get in on the high-rise luxury action remains to be seen. The developers hope “rising tides will lift all boats,” said Denny Grimes, President and CEO of Denny Grimes & Team Realty. “They tried to get it off the ground, but the downtown tower market hasn’t proven itself yet.” Prima Luce on the Waterfront plans to test those waters when it’s finished in 2024. With 220 residences and a more modest price tag (starting at $310,000 for an 837-square-foot studio), it hopes to entice residents with amenities as a zero-entry waterfront pool and revitalized riverfront location. As the demand for city living grows, the downtown seems primed for the elevated living found throughout the region.