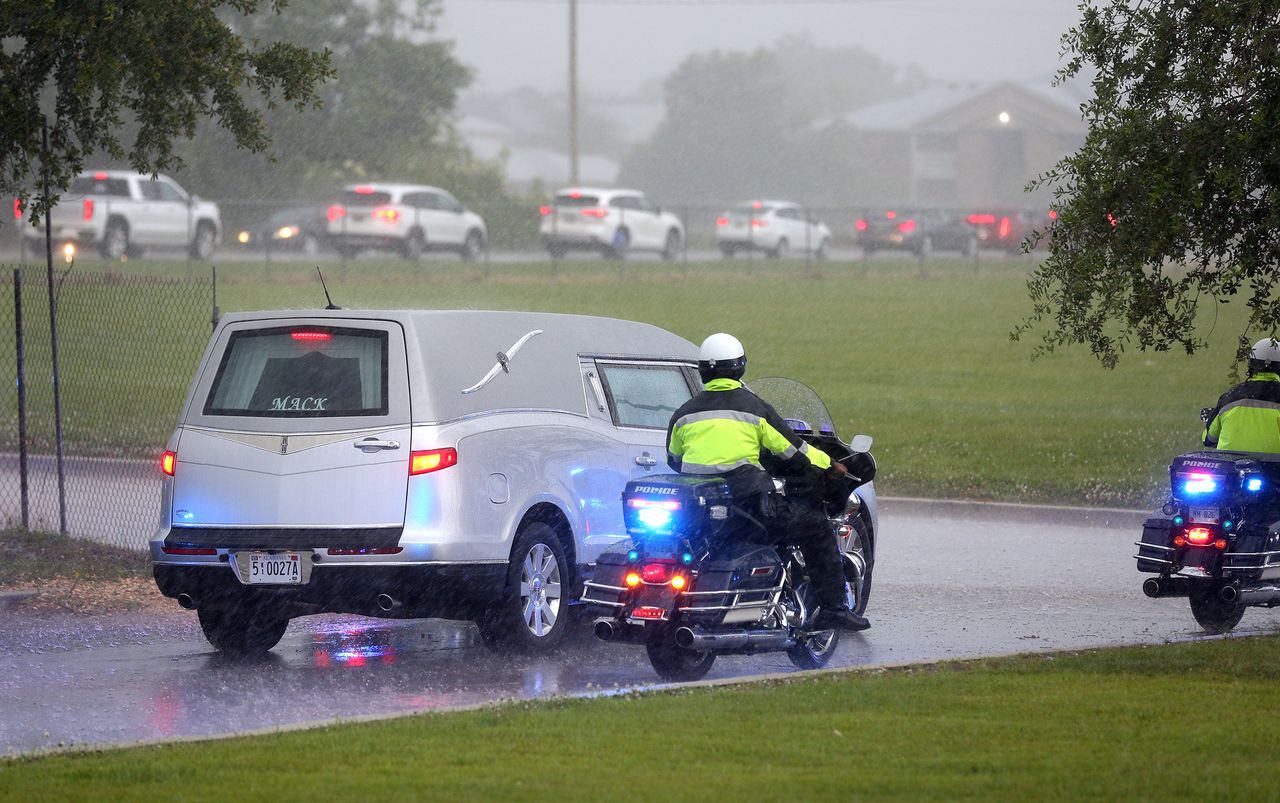 A Gulf Shores Police Department incident report paints a disturbing picture of training and response during last year’s chaotic rescues and the tragic drowning of a Baldwin County sheriff’s deputy on the peninsula. of Fort Morgan.

Gulf Shores Police Chief Ed Delmore also points to the report as illustrative evidence that a professional emergency response team, including trained lifeguards, is needed on the unincorporated peninsula to the west. from the Gulf Shores city limits.

Four trained lifeguards, with the Gulf Shores Fire Department, played a pivotal role in getting people out of the choppy waves of the Gulf on June 6, 2021. The beaches on the peninsula – a mix of private, federally owned beaches , state and county – are protected by a volunteer fire department, none have lifeguard certificates. It took Gulf Shores rescue swimmers between 20 and 23 minutes to arrive at the scene from West Dune Drive toward the tip of the peninsula.

“Whatever vehicle is used, there must be professional services out there,” Delmore said.

Representatives from the Fort Morgan Volunteer Fire Department say they have not seen the incident report, which was completed last September.

Michael Ludvigsen, who was the acting fire chief at the time and is the current chairman of the volunteer fire department board, said he was instructed to seek a court order to receive one. copy.

Delmore said the report wouldn’t have been released until after a grand jury convened, which was “months ago.” He said no one within the volunteer fire department asked him for a copy of the report.

The report uncovers the chaos that unfolded on the peninsula a year ago. Ten swimmers were listed in the report as being in distress. Five were taken to hospital.

Baldwin County Deputy William “Bill” Smith, 57, who died of accidental drowning, was the only fatality.

Smith and Deputy Sydney Wentworth, both credited with saving a life, were part of a newly formed beach patrol unit set up by the Baldwin County Sheriff’s Department. The new unit was formed in March in response to the Fort Morgan Volunteer Fire Department’s 2020 stance that it was not going to regularly patrol the beaches, the report said.

Smith and Wentworth were assigned to a “duty outside the normal scope of law enforcement,” according to the report. Neither were certified lifeguards, and the report suggests Smith used his own personal funds to purchase a lifeline, masks, snorkel and other gear.

Smith was among the first people on the scene and rushed into the gulf and saved the life of 19-year-old Dante Reed, a beach attendant at a nearby condo who had tried to save a swimmer in distress – Adrienne Korecky – but got into trouble himself. At the time of Smith’s arrival, according to the report, four people were in the gulf battling the choppy waves.

Smith gave Reed a flotation device that saved his life. Without it, according to the incident report, “Reed most certainly would have drowned.”

But Smith and Reed remained in the gulf for nearly 40 minutes, according to the report, until they were brought ashore by Gulf Shores Fire Department rescue swimmers.

Wentworth, meanwhile, was credited with saving Korecky’s life. Korecky and her sister, Heather Ronney, first entered the gulf to rescue their father, William Watkins, who was the first of the stranded swimmers, according to the report. Watkins and Ronney left the water mostly under their own power.

Two other recused swimmers from Gulf Shores swam to Wentworth, Korecky and a third swimmer – Bobby Marlowe – to make sure they were okay before a US Coast Guard boat arrived to pull them out. ‘water.

Rescue swimmers, also from the department, arrived either by their own personal vehicle or by jet ski, and began rescuing swimmers in distress, including two members of the Fort Morgan Volunteer Fire Department who attempted to helping other swimmers who ran away in the Gulf and also fell into distress.

According to the report, a Gulf Shores fire company arrived 20 minutes after receiving a call for help and took control of incident command. The engine company responded from a station 17.3 miles from West Dune Drive.

Says Delmore, “It takes us a while to get there. It took a while for our heroic firefighters to get there with the people who had the right training and the will to go to work and the help of the Coast Guard and they also came from far away .

The report also showed there were gaps in how the Fort Morgan Volunteer Fire Department handled the emergency.

Among the issues was uncertainty over who was in charge of the department. According to the report, Craig Rohman, the current department chief, took incident command from Ludvigsen, who was on the roof of nearby condos at the time but was unable to see much of the situation as it unfolded. Ludvigsen, according to the report, was working security at the condos at the time of the call.

Ludvigsen, according to the report, told investigators that at the time the agency had no chief, deputy chief, or lieutenants and that people were “calling on him” to run the agency.

“The command and leadership structure of FMVFD is unclear,” the incident report said. Rohman, a former battalion chief and EMT at Mt. Zion, became the department’s current chief last July.

There were six volunteer firefighters at the scene, but crucial lifesaving equipment was unavailable, the report said.

An “Emily” life-saving device was left at the fire station. Additionally, there was insufficient manpower available to retrieve and launch the department’s jet ski, the report said.

A jet ski arrived later, but it was driven by Gulf Shores lifeguards. The two swimmers covered it for around 18 miles in “deteriorating surf conditions to aid in rescue”.

None of the unincorporated peninsulas are patrolled by the City of Gulf Shores. The city’s emergency units serve as backup whenever called upon. The report suggests it was Smith who called for help in Gulf Shores.

“It’s a case example of how when lives are at stake and something goes wrong there, we’re going to do our best to help,” Delmore said.

The report also says Fort Morgan volunteer firefighters found the personal watercraft they owned was “too difficult” to operate and had not been used for at least a year.

Medical response has also been lacking, the report says. Reed, who suffered the most injuries, was not rushed to a hospital until more than an hour after being rescued.

The US Coast Guard evacuated two swimmers – Korecky and Marlow – to Dauphin Island. Wentworth returned ashore to check on Smith, according to the report.

“Had the Coast Guard not made the operational decision to evacuate the two victims they rescued to Dauphin Island, the medical resources on site would have been severely overstretched,” the report said. “Medstar dispatched three ambulances which arrived 30 minutes, 45 minutes and 95 minutes after the initial service call.”

Rohman declined to comment on the incident report, which Ludvigsen says the department has not yet seen.

Rohman said his agency has 15 volunteer firefighters, who respond to emergencies “when available and not in their regular full-time jobs.”

“Unfortunately we don’t have a certified lifeguard or lifeguards,” he said.

Rohman said most firefighters are trained to use the equipment. He said training had taken place for the operation of a brand new autonomous life-saving device called Dolphin 1 which the agency had recently purchased.

“The previous unit we had was basically a flotation device, a remote device that someone could grab onto and we can get them ashore,” Rohman said. “The unit we purchased has the ability to bring people in and has the power to pull someone out of the water.”

He added: “The majority of our employees have been trained on this. We will have several training sessions on it until everyone is familiar (with its use).

Delmore said he simply believes that a volunteer fire department that “draws from the population of the area” is not “large enough to generate enough qualified people” to meet the emergency needs of the peninsula. .

The area, he said, continues to grow in population and explodes in activity during the summer months when vacationers arrive.

“That’s beyond the scope of what a volunteer fire department can handle,” Delmore said. “The area is growing, but the services on the fire side are not growing with it. It is a concern.

One solution, proposed by Alabama State Sen. Chris Elliott, R-Daphne, is to institute an increase in the lodging tax paid by vacationers staying at beach rental homes on the peninsula. The lodging tax rate in Fort Morgan is 6%, which is much lower than what renters pay in Gulf Shores and Orange Beach. Both cities recently enacted 3 percentage point increases in their lodging tax rates, bringing their respective overall rates to 16%.

But critics of placing more emergency personnel at Fort Morgan say the peninsula is a complicated setting and where a team of lifeguards might not make much of a difference. They also argue that there is no concentrated area where tourists congregate, such as a public beach. Also, there is no flag warning system on the beaches unlike what exists in Gulf Shores and Orange Beach.

Gulf Shores and Orange Beach, on the other hand, include a mix of public beaches that attract large crowds and high-rise condos that also increase density along their beachfronts.

There are no high rise condos on the peninsula.

“We’ve become more proactive in our messaging and trying to educate and even enforce than we’ve done in previous years,” Delmore said. “Tourist numbers continue to rise and people just don’t know how dangerous (the Gulf) can be.”