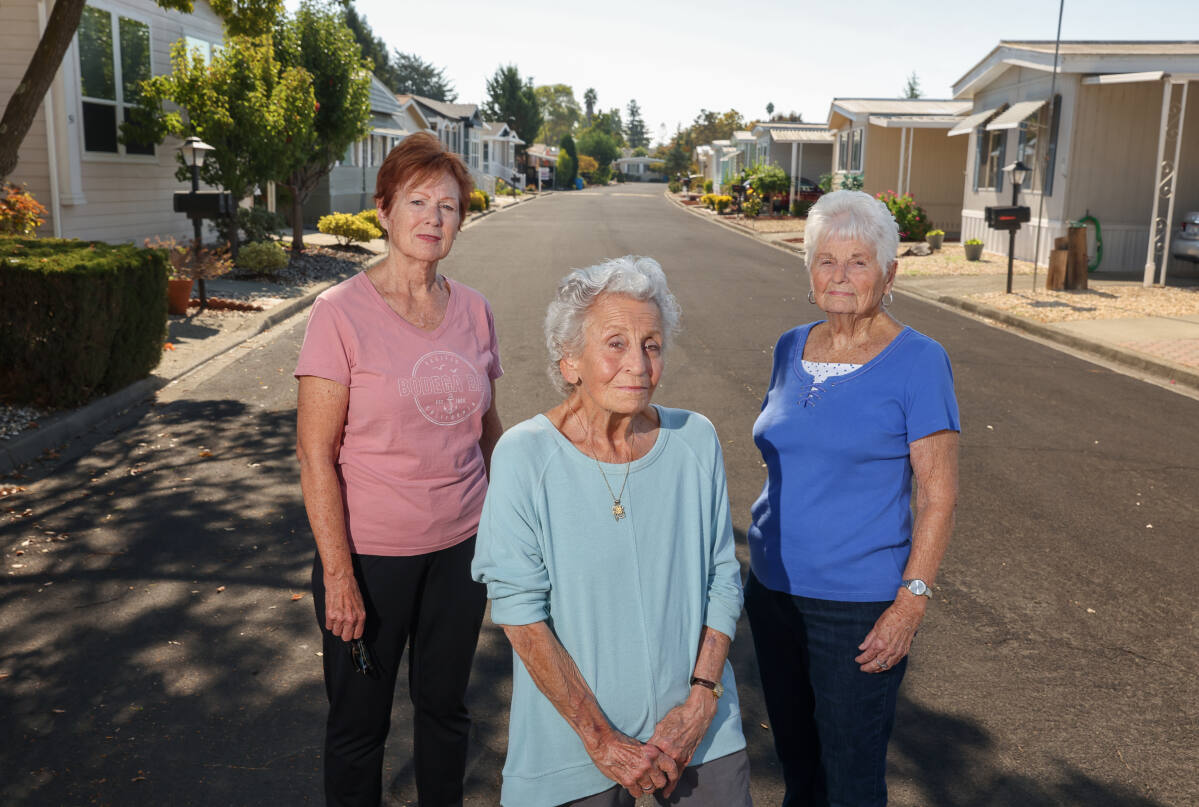 Last month, 80-year-old Joyce Amos received a surprising notice: On January 1, she will see a 5.7% rent increase on the land under her mobile home.

Alone after her husband’s death, Amos moved from Hayward to Country Mobile Home Park in Santa Rosa in 2013 where she found a home she loves and a community she cherishes. But, in the nine years she’s lived there, her rent has gone up more than 36%, pushing her fixed income to the limit.

“A few bills that I just stopped paying because I can’t afford them,” Amos told me.

Sue Wilson, 85, is in a similar situation.

She and her husband bought a mobile home in the park 12 years ago after realizing the rent for their apartment in Oakmont would be unmanageable if something happened to either of them.

Wilson’s husband has since passed away, and she’s entirely dependent on Social Security and a bit of an IRA.

In February, for the first time since living in the park, her housing costs, thanks in part to soaring utility prices, exceeded her Social Security.

“It just upset me,” Wilson said. “I just can’t let this happen again.”

“I think it’s going to hit me really hard,” she told me. She doesn’t have much wiggle room other than wearing triple layers this winter to keep her gas bill down.

“They’re going to get us out of here, and there’s nowhere to go,” Amos told me.

Mobile homes represent one of the few remaining affordable housing options for many. In most cases, residents buy the house, at a fraction of the price of a traditional house, and then rent the land below from a park owner.

Different laws govern mobile homes from other dwellings, and rent control is a matter of local control with no state limits.

Santa Rosa has 16 rent-controlled mobile home parks with 2,155 spaces, as well as a few subdivisions where residents own their lots. Base rents range from just under $500 to $1,600 per month.

Across California, 104 cities and counties have some form of rent stabilization rules, with annual increases mostly tied to a percentage of the Consumer Price Index (CPI), the measure of prices for goods and services paid by consumers in a region.

And that’s the crux of the matter for Santa Rosa mobile home residents who are fighting to change the city’s rent ordinance, which currently allows rent hikes equal to 100% of the area’s CPI. of San Francisco with a cap of 6%. This year, it’s 5.7%.

For most seniors who occupy these parks, this is a problem. Twelve of Santa Rosa’s 16 parks are for people ages 55 and older, and the majority, according to surveys of residents, are heavily dependent on a fixed income.

For Tom LaPenna, 75, president of the Santa Rosa Manufactured-Homeowners Association and resident of Sequoia Gardens Mobile Home Park, the easiest solution is to adjust Santa Rosa’s prescription to a lower percentage of the CPI, as the have done many other jurisdictions..

“We should have done this years ago,” LaPenna said. “It’s late.”

He and other advocates are pushing for 50% CPI with a 3% cap, arguing that Santa Rosa shouldn’t be tied to San Francisco’s vastly different economy. He pointed out that even San Francisco uses 60% of its CPI to calculate rent increase limits.

Greg O’Hagan, who represents landlords of the Rancho San Miguel mobile home park, noted that despite the 5.7% rent increase for 2023, the average annual increase over the past 22 years is well below 2.75%.

“This is an average over time,” O’Hagan said. “This is how an ordinance should be considered; not a snapshot in time.

“For seniors living on a fixed income, every CPI adjustment that’s not met by an equal Social Security adjustment risks pushing them into the streets,” the mayor of Santa Rosa told me. , Chris Rogers.

He said he supported a change to the order.

“Obviously everyone is feeling the pinch of inflation, but these people living in these parks are really one paycheck away from being on the streets. That’s the context in which we’re talking about this” , Rogers said.

JBG SMITH expands its development in the national landing zone