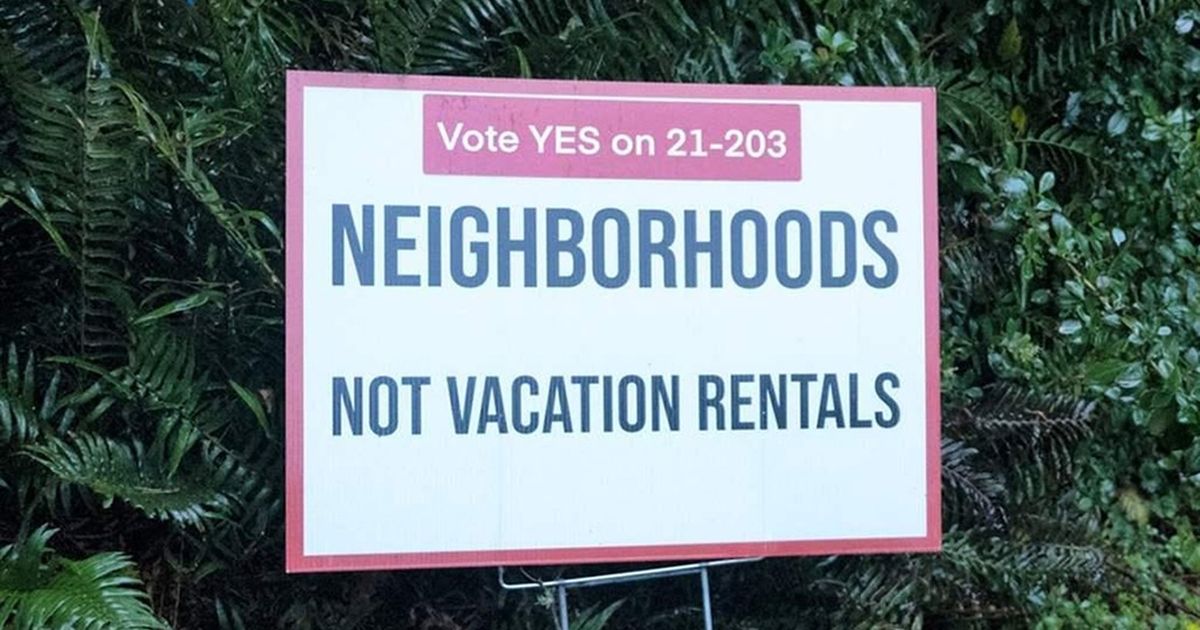 DEPOE BAY, Oregon – Postcards with big promises started appearing in mailboxes in coastal Oregon communities in 2019: “Rent your house short term, use it when you want, guaranteed 5,000 $ more monthly income than what you earn with your current property management company, â€recalls Retiree Monica Kirk.

Internet service companies such as Airbnb, Vacasa, and VRBO have run into short-term rental caps in neighboring towns. So they began to aggressively approach landowners in quieter, unincorporated seaside neighborhoods like Kirk’s, where rental restrictions were less stringent. Over the next year, according to a public record request filed by Kirk, the number of short-term rentals permitted in unincorporated neighborhoods in Lincoln County, Oregon, increased from 385 to 601.

â€œFor most of the year, not just the season, there were more renters than full-time residents,â€ Kirk said.

Removing all of those homes from potential long-term rental stock made it all the more difficult for workers to afford homes in the County, a tourist community on Oregon’s central coast. The area, like all popular vacation destinations, needs affordable housing for workers that make it buzz.

Kirk and his neighbors have started collecting signatures for a ballot initiative that, over the next five years, will completely eliminate short-term rentals in unincorporated communities in the county. Its successful passage in November was one of the few bans to be approved in a wave of efforts to tackle the effects of short-term rentals on affordable housing in western tourist communities.

Even before the pandemic, destination cities in the West lacked affordable housing. Limited supply, the remote nature of some communities, zoning restrictions, and even short construction seasons have all contributed. But the COVID-19 pandemic has accelerated everything, including the rise of so-called Zoom cities. Suddenly, people could live, work and recreate in the vacation communities of the West.

In recent years, it has also become much easier for second home owners to list vacancies with internet-based real estate companies that promise constant cash flow. When these homes enter the short-term vacation rental pool, they are no longer available to the local workforce.

There is little statewide effort to restrict short-term rentals – Idaho even bans local governments from passing bans – but some cities and counties have restricted vacation rentals. In Washington, Chelan County leaders recently placed new constraints on the number of units in unincorporated areas that can be rented out on a short-term basis; Seattle and Leavenworth each have their own restrictions.

Brian Chesky, CEO of Airbnb, said recently that about a fifth of the company’s activity per night is now stays of 30 days or more. People book longer stays that combine work and play, an area the company sees as full of growth potential.

Portland-based Vacasa made public in early December the promise of its technology to manage properties and the understanding that vacation rentals for large groups or families are an untapped market. Jamie Cohen, chief financial officer of Vacasa, told Oregon Public Broadcasting that at least a fifth of people staying in vacation rentals did so for the first time during the pandemic.

In Colorado, residents of eight mountain towns have passed short-term rental taxes, the proceeds of which are intended to alleviate housing shortages. Colorado State Senator Chris Hansen, a Democrat, proposed legislation that would tax many short-term rentals at the accommodation property rate, which hotels pay, for each day the property is rented over 30 days a year.

His bill emerged in response to developers who began converting ski resort hotels into short-term condominiums with individual owners. This meant that new rentals were eligible for lower residential property tax rates, instead of the accommodation rate. In the ski town of Steamboat Springs, the move took $ 1.5 million from the local school’s budget, Hansen said.

â€œIf we don’t have a stable property tax base, then we start to create a huge additional burden on the state budget,â€ Hansen said. “And we have a lot of constraints on our state budget.”

Real estate agents, property management companies and individual owners oppose the legislation. They would prefer to see other options used, including restricting short-term rentals to certain areas of communities, said Julia Koster, executive director of the Summit Alliance of Vacation Rental Managers, which represents owners and managers of around 7 000 short-term rental units in and around ski resorts.

In general, the vacation rental industry struggles with efforts to enact short-term moratoriums or bans. This was the case with the community-led voting measure in the Oregon coast, Kirk said. Two separate political action committees opposed it; they were mainly supported by real estate and property management interests that easily exceeded the local $ 35,000 raised to adopt the measure.

Meredith Lodging, a large local vacation property management company in Oregon, gave Save Lincoln County Jobs $ 200,000, a PAC put in place explicitly to fight the measure. The VIA Oregon Coalition, a separate political action committee established to support short-term rental policies, received $ 28,500 from the Oregon Realtors and one of its political action committees. Another $ 10,000 to fight the measure came from Vacasa.

“We support fair and equitable regulations that preserve our owners’ ability to operate their vacation rental and earn the income they rely on, while protecting the interests of full-time residents,” Sarah Tatone, Head of communication at Vacasa, said in an emailed statement. â€œIt’s about finding a balance to fairly regulate short-term rentals, without limiting the potential to stimulate growth or support local businesses and the economy.

Yet few popular western tourist communities have enough affordable options for the staff needed to run a peak season vacation destination. In Montana, people who cannot afford rent in some tourist towns have camped out, encroaching on grizzly bear territory. The housing shortage has led to more encounters between bears and humans, said Bill Avey, a national forest supervisor in the area.

In Whitefish, the gateway to Montana’s Glacier National Park, the lack of affordable housing in 2021 has forced nearly every food or beverage-related business to cut back hours or close at least one day a week at peak of the summer tourist season, said Lauren Oscilowski, owner of Spotted Bear Spirits Distillery. In the past year, around half of the people in its 11-person team have been forced to move because their owners decided to turn their homes into short-term rentals.

â€œThere’s this national thing where the hospitality people don’t go back to hospitality because the wages are too low, or they’re fed up with dealing with the public or whatever,â€ Oscilowski said. â€œBut that’s just one piece. The biggest thing for us is really the accommodation.

Oscilowski sits on the Sustainable Tourism Management Committee of the Whitefish Convention and Visitors Bureau. She supported a moratorium on new short-term rentals, if only to slow down the transition. The measure was narrowly rejected in October.

Still, she is encouraged that the city is considering changes.

â€œAnyone who has been a part of our community for over 10 years has seen the change and also feels the frustration and the hardship,â€ said Oscilowski. â€œIt is an undeniable stake.

Readers' opinion: give your opinion on January 4 and 5 on the 24-unit apartment project in the city center